Why would anyone consider Behavioural Optometry?

Here are just a few examples of performance difficulties that are more easily explained using the Behavioural Optometry visual model:

Why is it that a child who can see the board perfectly well when they start to copy from it struggles increasingly to focus both board and book over time?

Why is it that a person can read fluently and accurately – but struggles to take in what they have read?

Why is it that a person with good sight should constantly trip over thin air, stub their toes and catch themselves on cupboards and door frames?

Why is it that a person with good sight can read a word correctly on one page – but fail to recognise it on the next page?

Why is it that a person who seems to concentrate so intently – and to the exclusion of all else – when using the iPad – can struggle to concentrate for even 5 minutes in the classroom?

What does "behavioural" mean?

In the context of Behavioural Optometry “behavioural” simply refers to all human actions or behaviours – meaning all the things we do or want to do on a daily basis.

The ultimate purpose of the visual system is to enable us to understand the world around us and perform or “do stuff” within it. This applies not only to the outside physical world of space and objects – but also the inner physical world of our body organisation and movement – and our inner mental world of imagination and thinking.

You are not just a pair of eyes! Behavioural Optometry is a holistic approach that takes account of the whole person.

Why is there a different kind of Optometry?

For about 80% of the population standard Optometry works just fine. They have developed fairly good functional visual skills and any problems they have are primarily because they have or have developed long or short sightedness, astigmatism or age related reading difficulties – or they have a general or eye related pathology. Standard Optometry is very good at dealing with these issues.

However, the other 20% of the population have difficulty with actually using their visual system effectively. This is generally a functional control issue. There is nothing “wrong” with their eyes – they have simply not developed the control and skill they need to use their visual system well in particular situations. For some this may be in the classroom, and for other the sports field or in the office environment. For these people the more holistic approach that Behavioural Optometry offers may yield some explanations and solutions to their difficulties.

How is the testing different?

Behavioural Optometry is a specialisation within Optometry that focuses attention on the QUALITY of visual skills rather than just the ability to “see”. It investigates how the brain, eyes and body work together as a team to make sense of light entering the eyes. Behavioural Optometry explores how efficiently we have developed the necessary visual skills, and whether they are resilient enough to cope with intense near work demands of both classroom and office. 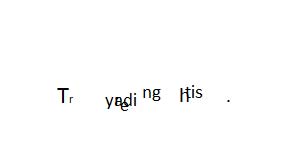 Confused? It says: “Try reading this”.

This is the sort of thing a person might see when they are struggling with functional control over focusing and eye alignment. Letter size, spacing and alignment can vary making reading and learning to read and spell extremely difficult. As you can see there is actually no blurring here – sight is good but the letters are simple incorrectly spaced, jumbled in order and superimposed.

Here is another example – with some blurring (fading) of letters. It says “That was a more extreme example.”

Sometimes the text actually looks fine but too much effort is required in the visual system in order to see it properly. This effort is often “poached” from the task itself – in this case reading – and this is why a person might read well but still struggle to absorb anything that they have read.

It is important that you see that letter “a” in the word cat – but equally important that you comfortably and effortlessly perceive it to be exactly midway between the “c” and the “t”. It is also important that you recognise the “a” whatever font it is written in, that you can appreciate it in context with the surrounding letters and with immediate meaning and visual imagery (of a cat). That you can simultaneously begin to process a few words ahead of it without moving your eyes, and all whilst sustaining a relaxed and  upright posture, filtering out a distracting television program and being simultaneously aware of someone walking into the room and calling you for your tea.

In a sporting scenario the equivalent would be the ability to sustain a relaxed balanced posture whilst running to intercept a moving ball, simultaneously aware of the position and likely action of opposition players on the field, and developing your ongoing game plan so that you can deftly recover the ball and deliver it to the exact spot at the exact same time as an appropriate member of your team arrives there, in space, to catch it.

Behavioural Optometry talks about vision. What is it?

Vision is a learned process from which emerges an understanding of WHAT is seen, WHERE it is and how to react or respond to it. Although we are born able to ‘see’, the process of UNDERSTANDING what we see is a learnt skill. Vision develops throughout life to become the dominant information gathering and processing system of the human body.

Vision is MUCH MORE than simply seeing clearly. It is the entire process whereby a person understands what he sees – and then uses this information to do something – such as reaching out to pick up a glass or jumping over a stream – accurately and efficiently with a minimum expenditure of effort and energy. 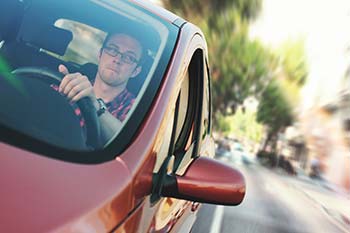 For example, when driving a car, vision is much more than reading license plates clearly at two hundred feet. Vision is the total process whereby the spatial relationships between the cars and trucks and other things (moving and stationary) are taken in and processed by the driver so that he may guide the car safely to its desired destination, without an accident and with minimum stress on the driver. Vision judges the relative speeds of the other cars, and alerts the driver to a pedestrian stepping into the road or another car stopping suddenly at an intersection, or the door of a parked car opening.

Vision is used by students to accurately perceive what is on the board, to absorb, understand and retain what they read and to direct the pencil in a controlled manner across the page to write an answer or fill in the blank spaces on a sheet.

Should I continue to have my standard eye tests?

Generally it is not a good idea to also continue with your standard eye care whilst undergoing Behavioural Optometric vision care, as the conflicting advice would just be confusing and, because of the intervals required in NHS testing, you may not even be eligible. Eye health checks carried out in standard eye care are also included in your assessment and reviews. This does not apply to any treatments for pathology.

How do I book an assessment?

How much will behavioural optometry cost?

There is no NHS contract for Behavioural Optometry and assessments, reviews and treatments are all private.

A standard Behavioural Optometry assessment typically costs £199 – including a full report with recommendations and takes around 45 to 60 minutes. A non-redundable deposit of 50% is required at the time of booking.

Behavioural Optometry review appointments cost £49 and generally occur at intervals of between 3 to 12 months depending upon circumstances.

Vision Therapy costs vary with the type of therapy required. Home computer based programs start at £125 and In-Practice Therapy at £300 for a block of 5 sessions.

You can request an Assessment online

If you have any further questions or require more information please phone us on 02920 228 144.
Book an Assessment