How does a vision problem affect concentration or the ability to learn?

We are all aware that we use our eyes almost constantly in the classroom and work place. In fact, it is estimated that 70 to 90% of all information for learning comes via the visual pathways. But we give little thought to how the visual system is able to absorb so much information.

We understand that we need to concentrate effortlessly in order to learn, but rarely consider what that actually means.

Simultaneously running many complex processes (from the start up menu), even when apparently idle, as when we are lying in bed sleeping. 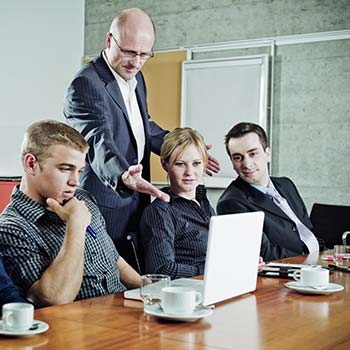 The computer (our brain) has a vast, but nevertheless limited, memory capacity, and a finite amount of memory (energy) is required to ‘run’ each program (sensory or motor process) or function. Additionally, energy is required to absorb, process, manipulate and combine information according to the requirements of the task.

Assuming that the computer has capacity enough to cover all required tasks simultaneously, BUT only when each operates at an optimal level of efficiency or skill, then deficiency in any system (such as low body muscle tone requiring extra effort to remain upright or difficulty efficiently ‘homing in’ with the focusing mechanisms of the eye requiring higher level effort to clear the letters) would ‘rob’ other functions of their full energy quota.

All (even seemingly unrelated) functions would gradually decrease in efficiency, just as programs on the computer run slower and slower if there are too many programs (tasks) running simultaneously. Eventually systems stop running altogether (information overload) and it is necessary to close programs in order to free energy to the remaining tasks.

Thus requiring only minimum energy levels to sustain it. If one sense requires more than its fair share then it will deprive the other senses of vital energy and the effect will be felt throughout the system.

Taking the analogy a step further, it is clear that if we can reduce the amount of energy required to ‘run a program’ then we can free that energy to other systems required in achieving a task. This analogy explains how therapies working upon other sensory and motor systems can impact significantly upon visual function, and vice versa. It also helps to explain breakdown in visual function during periods of stress or sensory overload (or deficit) in another system.

Improving visual skills helps us direct maximum attention at the task itself helping us to achieve our full potential.